Lawrence Parker, author of The Kick Inside: Revolutionary Opposition in the CPGB, 1945-1991, has published a new book, Communists and Labour: The National Left-Wing Movement 1925-1929.

The National Left-Wing Movement (NLWM), set up by the Communist Party of Great Britain (CPGB) in 1925–26 to pull the Labour Party rank and file towards Communist politics, was one in which Marxists worked in a largely open fashion to promote specific programmatic principles.

This publication sheds new light on how the early CPGB approached its work inside the Labour Party and points to a more variegated picture of the CPGB in the mid-to-late 1920s as still capable of producing rational and principled responses to the class struggle — albeit, in the case of the NLWM, partially flawed and unsuccessful ones.

The NLWM had another goal forced upon it of protecting Communists and their sympathisers from a Labour leadership intent on expelling and disaffiliating such elements in a pursuit of respectability. This monograph seeks to qualitatively measure the impact of that disaffiliation process on the CPGB, the NLWM and Labour sympathisers.

You can order the book here. Below is an extract from the book’s introduction.

The National Left-Wing Movement (NLWM), an oppositional force inside the Labour Party in the mid-to-late 1920s, designed to pull rank-and-file Labour members towards the politics of the Communist Party of Great Britain (CPGB), has the status of a relative historical curio. In the ever-expanding literature on the CPGB, the NLWM has received only cursory treatment.

This ‘novelty-item’ status is probably a reflection of the ‘grander’ historical events surrounding the NLWM in the trajectory of the 1920s CPGB. If people know anything about the CPGB in this era, they know of Lenin’s ‘hanged-man’ advice on affiliation to the Labour Party;the party’s role in the General Strike of 1926; and its adoption of disastrous sectarian tactics in the late 1920s.Compared to this, the NLWM is a relative blind spot.

The CPGB itself evinced very little understanding of the NLWM up to its dissolution in 1991. In one historian’s words, the Comintern’s seventh congress of 1935, which saw the popular front take centre stage in world Communist politics, came to be seen by CPGB members as a “foundation congress”.[1] This creates instant problems for the reception of formations such as the NLWM, which was constructed around the pursuit of a process of differentiation with a more ideologically diffuse Labour left, whereas later CPGB approaches to this constituency were hedged around with more modest ideas of adaptation and accommodation — the popular front being the exemplar of such tactics.

Thus, in its latter decades, while the CPGB was still concerned to promote unity with the left of the Labour Party, a nebulous courtship was conducted from a distance, and Communists, in general, did not organise within Labour (this had largely come to an end in 1940). As the CPGB became ever more concerned with notions of respectability (which, in this case, meant respecting the bourgeois proprietorial rights that the Labour Party bureaucracy expected to wield over its patch) and as its chances of becoming a mass organisation that could become an attractive partner to the Labour Party receded, such ‘unity’ became steadily more chimerical. Even though its programme, The British Road to Socialism (first published in 1951), in many ways represented the Communists writing the Labour left’s programme for it, the CPGB was generally forced to rely on more indirect means of influencing Labour, such as the trade unions.

This conservative approach had definite implications for the manner in which the CPGB handled the radicalism of past movements such as the NLWM. When, for example, the CPGB chose to emote on Communist-Labour relations in 1977-78,[2] there was no way, of course, that the historical experience of the NLWM could be central to that debate, given that it was set up to differentiate Communist politics inside a more generic Labour left and act as a bridge to the CPGB (although Monty Johnstone did at least outline a rudimentary awareness of the NLWM in 1978).[3] Official histories of the CPGB offer a bland outline of the NLWM. For example, Noreen Branson, having spoken to one of the NLWM’s secretaries, Ralph Bond,[4] does offer up some useful details but her narrative doesn’t reveal any of the key contradictions of the movement — in a similar fashion to Stalinist economists discussing the quantities of pig iron produced in the Soviet Union.[5] In other words, we know some of the facts of the NLWM’s existence but we know very little of how and why it existed.

The Trotskyist movement has a much better record of trying to excavate the history of the NLWM, led by Brian Pearce, who originally published an important essay ‘The British Communist Party and the Labour left, 1925-1929’ in 1957 (under the pseudonym of Joseph Redman). This offered a sympathetic analysis of the NLWM and the CPGB’s work in establishing it.[6] Pearce was a pioneer in this field and is deserving of respect. However, I have been critical of some of his approach in this study and, in particular, of his preference for quantifying the NLWM’s impact through bare statistics over exploring the qualitative evidence, which, in its very consistency, offers up a far less optimistic picture of the movement’s prospects. Nevertheless, Pearce, in identifying the NLWM as a positive force emanating from the CPGB beyond 1925 (i.e. after Stalin’s bureaucratic faction began to talk hold of the Communist Party of the Soviet Union), is an important figure in pointing up a more variegated picture of the CPGB in the mid-to-late 1920s.

Unfortunately, Pearce’s example has generally not been followed and when Britain’s two major Trotskyist organisations of the 1980s, the Socialist Workers’ Party (SWP) and the Militant Tendency, investigated the NLWM, the jaundiced picture that emerged had more to do with factional manoeuvring and soap-powder-type brand differentiation than with the real dynamics of the history involved. The Militant Tendency was an entrist group working inside the Labour Party and falsely denied that it had a separate organisation outside Labour. The SWP was Militant’s opponent, inventing spurious reasons as to why entry into the Labour Party was a thoroughly bad idea. This set the scene for their reception of the NLWM. Militant was obviously the more sympathetic but was publicly suspicious of the CPGB for maintaining a separate organisation outside the Labour Party (i.e. exactly what Militant itself did).[7] The SWP, on the other hand, in Tony Cliff and Donny Gluckstein’s desperate works of the period, felt duty bound to present the NLWM essentially as a ‘right-opportunist’ gambit and a capitulation to reformism, in order to do down Militant and thus any idea of entry work in the Labour Party.[8]

Academic works haven’t generally offered up anything better on the NLWM than the occasional, often trivial, aside,[9] the exception being Leslie Macfarlane’s 1966 work on the CPGB in the 1920s, which offers some useful detail and was a suggestive source of ideas for this work.[10]

However, there is another side to this partial disappearance of the NLWM from the history books. It was a badly organised and unsuccessful venture that lasted for barely three-and-a-half years. In fact, these years saw the removal of Communists from the Labour Party’s ranks and its political defeat at the hands of the Labour bureaucracy. So the question would be: why do we need a study of the NLWM?

The author doesn’t really have a pat answer to this question beyond his own cussedness and interest in obscure political formations. This work probably began with a set of different intentions and conceptions, roughly based on the thought that it would be a useful project since Jeremy Corbyn’s accession to the Labour Party leadership in September 2015 — the most left-wing leader in the party’s history — to understand the history of left-wing revolts in Labour. The author rapidly jettisoned these ideas, partly because he became suspicious of the utilitarian projections some of his friends put on the work.

The history of the NLWM has no specific bearing on today’s situation in the Labour Party. The NLWM was organised by a serious force to the Labour Party’s left: the CPGB, which was part of and exterior to the Labour Party in the first half of the 1920s. It was organised, in theory, on a precise political programme to offer a bridgehead for Left-Wing workers into the CPGB. Today, the Labour Party has a left-wing leader who is panicking the establishment (and is worth supporting for that reason alone) but there is no serious Marxist organisation to its left — merely a gaggle of incompetent sects. The idea that an organised Marxist conspiracy propelled Corbyn to power is a bizarre fantasy peddled by tabloid newspapers… and the Labour Party’s deputy leader Tom Watson. The movement that propelled Corbyn to power is ideologically incoherent and scarcely animated by socialist, let alone Marxist, ideas, instead being composed of people inspired by a loose amalgam of politically correct good causes and a weird cult of non-personality around Corbyn himself. So, ultimately, nothing has animated this work beyond the author’s own interest in the NLWM and filling a gap in the historical record.

However, while the author would be highly suspicious if his work were to become some kind of handbook for today’s militants inside the Labour Party, it does perhaps provide some more general — pessimistic — lessons as to the inherent problems of revolutionaries working inside reformist organisations. The CPGB of the 1920s largely worked in an open fashion inside the Labour Party and while it was able to animate a supportive section of Labour members inside the NLWM, it is doubtful this led to many long-term gains in the sense of making substantial numbers of Communists (or at least Communists willing to accept the CPGB as the ultimate organisational broker of their political identity). Later endeavours of the CPGB in the 1930s and subsequent entrist adventures in the Labour Party by smaller Trotskyist groups tried to offset the major drawback of open work (i.e. exposure to bureaucrats intent on expulsion and disaffiliation) by clothing themselves in the outward garb of social-democratic reformism and hiding their Marxist politics to a greater or lesser extent. It is doubtful if this later entrism achieved a balance sheet of anything more than the traditional leftist twin evils of opportunism and sectarianism. 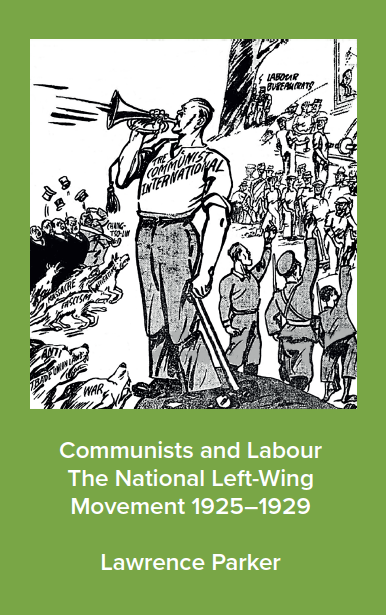 [4]Ralph Bond (1904–89) became better known as a documentary filmmaker and co-founded the London Workers’ Film Society in 1929. He remained with the CPGB until his death.

[7]T Aitman ‘Labour’s purge of the 1920s’ Militant 18 April 1986. Aitman said: “Militant is a newspaper whose supporters represent a trendof opinion in the [Labour Party] — unlike the Communist Party of the [1920s,] which was a separate and distinct organisation.”

[9]For an example of such trivia, John Callaghan argues: “[The NLWM] was designed to seduce the Labour left into joint work with the communists and succeeded, up to the General Strike, in fostering some sort of united front…”[9]— J Callaghan Rajani Palme Dutt: a study in British Stalinism London 1993 p 117.

As this study will argue, if this was a seduction then it was a remarkably unsuccessful given that the courtship had in fact foundered long before the General Strike.

[10]LJ Macfarlane The British Communist Party: its origin and development until 1929 London 1966.