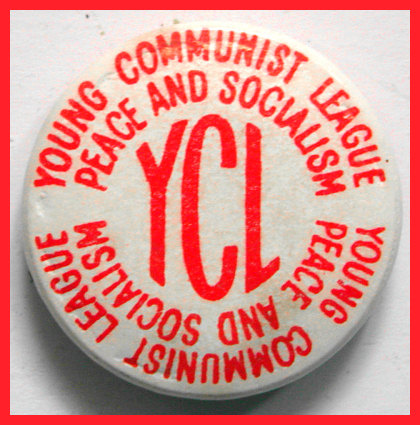 Several authors, such as Mike Waite and Geoff Andrews, have argued that the Young Communist League was an important incubator for ideas of reform within the Communist Party of Great Britain in the 1970s, with YCL members of the late 1960s and early 1970s being fundamental to the Gramscian/Eurocommunist ideas proposed ion the mid-1970s, predominantly concerning the redrafting of The British Road to Socialism in 1976-77. Even though, as I have written here, that the YCL was haemorrhaging members throughout the late 1970s and early 1980s, the YCL still was at the forefront of embracing these reforms and promoting the notion of the ‘broad democratic alliance’. For example, it was the YCL that pushed for a recognition of gay rights by the Communist Party, which caused much consternation within the Party and debated across the pages of Comment in 1976.

However while the YCL was generally at the forefront of progressive reform within the Communist Party, it was not a homogenous organisation and there were some sections of the League which rejected the direction that the Party was moving in – even some of the YCL left to form the youth wing of the New Communist Party in 1977-78 (and some of those returned to the CPGB under the guise of The Leninist faction in the early 1980s). Looking through the archives of the CPGB (as our university currently has a trial subscription to the online version), I found an example of this resistance from YCLers in a 1978 letter (CP/CENT/EC/16/04).

In late April 1978, the Haringey YCL branch wrote to the Executive Committee of the CPGB complaining about the direction of the YCL and the topics raised in the League’s paper Challenge. Steve Munby had taken over editorship of the paper in December 1978 and as Graham Stevenson has written, ‘In a conscious way, Challenge now took on the new youth cult of punk music and culture.’ This coincided with the rise of Rock Against Racism and the Anti-Nazi League, which, as I have discussed here, featured heavily under Munby’s editorship.

But the Haringey branch complained that the YCL priorities of ‘campaigning on the issues of youth unemployment and racialism’ were ‘not being reflected in the pages of Challenge.’ The branch raised particular criticism of the two last two issues since Munby had become editor, complaining:

Issue no. 51 is almost completely devoted to punk rock and homosexuality. 6 out of 8 pages, or approximately 75% of the paper is devoted to these topics.

Issue no. 52 has 3 out of 8 pages on punk rock. Issue no. 52 also uses the slang term “Commie” frequently ( a term we are more used to hearing from the NF and the Tories, than members of the YCL).

Obscene cartoons and foul language have also become a feature of these editions of Challenge.

The branch expressed that it was their fear that if the paper continued ‘to give an inordinate amount of space to homosexuality and punk rock’ then the YCL would be ‘held in contempt’ by the CPGB and the wider labour movement, despite the CPGB EC endorsing a platform of gay rights only a year and half earlier. The Haringey branch stated that these topics were ‘not the major concerns facing the [labour] movement’ and were being highlighted at the expense of the ‘real issues confronting young people’, which the branch felt was ‘outrageous’.

The branch further claimed that Party members who had read the paper had been ‘appalled and disgusted by its contents’ and the reaction by the public had been ‘scorn and ridicule’. The letter concluded with a call for the EC to discuss the paper at its next meeting. The letter also noted that its content had been passed unanimously by the branch.

The archives also contain the reply sent by the EC to the Haringey YCL branch. The CPGB’s Assistant Secretary Reuben Falber replied:

Unfortunately the papers of the YCL have not been digitised, so I haven’t been able to find whether the issue was taken up with the YCL’s EC. However it is most probable that the YCL EC would have rejected this proposal from the Haringey branch. A report by the YCL’s London District Secretary Nina Temple (who was later the CPGB’s last General Secretary) to the League’s 1979 Congress and the CPGB’s Political Committee celebrated that Challenge had ‘tuned into punk and reggae, unemployment and anti-racism, far ahead of the rest of the left and popular press’ – although this is highly disputable, with RAR/ANL taking the initiative and leaving the YCL behind with regards to these issues (CP/CENT/PC/15/01). Gay rights were also seen as integral to the ‘broad democratic alliance’ and the struggle for socialism. The YCL programme Our Future presented at the 1979 YCL Congress made a statement about ‘unity’, which included:

Gay people contribute to the fight on opposition to sexual straitjacketing and a demand for freedom of expression in our personal relationships.

The schism between the ‘Euros’ and the ‘tankies’ in the CPGB in the 1980s has often been characterised as a generational schism, with those who entered the Party in the late 1960s onwards coming up against the ‘old guard’ who had survived the crises of 1956. But documents such as this letter from the Haringey YCL branch remind us that the divisions in the Party were much more complicated.