In the aftermath of the mass shooting in Charleston, South Carolina, it has emerged that the killer had been photographed in clothing bearing the flags of Rhodesia and apartheid South Africa. While a lot has been written on this in the last two days, I thought I would post this on how these regimes (and their flags) are used as symbols of white supremacy and racialised anti-communism by the far right across the Anglophone world. 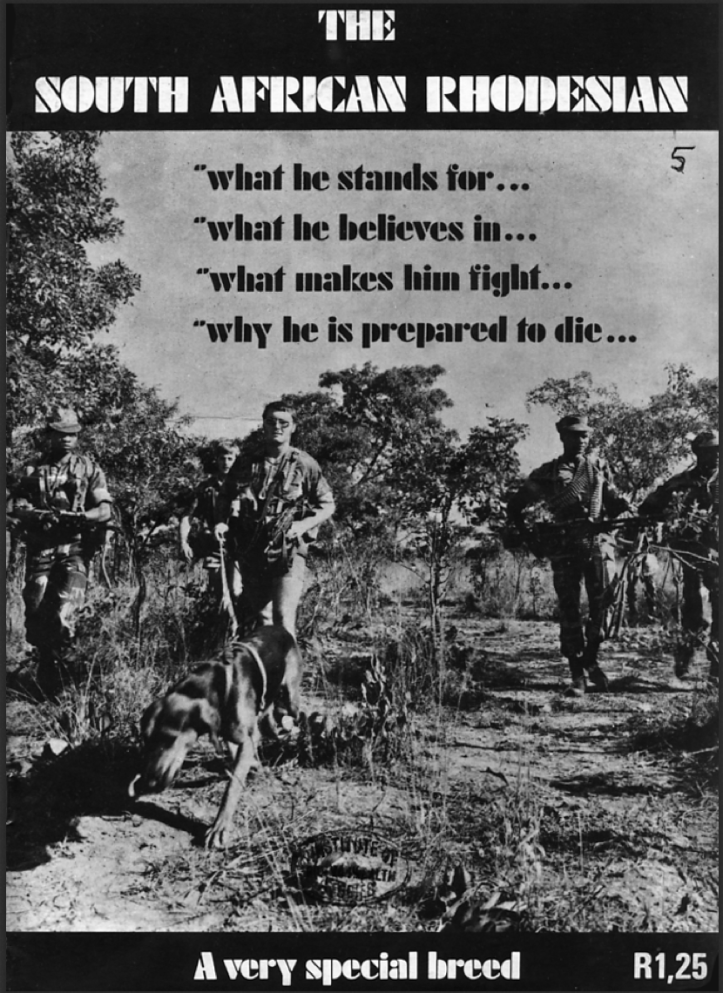 Between the early 1960s and the early 1990s, Southern Africa became a focal point in the Cold War, where South Africa, Southern Rhodesia (now Zimbabwe), South-West Africa (now Namibia), Mozambique and Angola were seen as bulwarks against communism and Pan-African socialism. South Africa had adopted the policy of apartheid in 1948 which separated the population into distinct racial categories and denied most rights to its ‘non-European’ subjects. It also controlled, unofficially the territory known as South-West Africa, which it has inherited as a mandate territory from Germany after the First World War. Although the United Nations did not recognise South Africa’s mandate, South-West Africa was run on apartheid policies until it gained independence in 1990. Southern Rhodesia, also known as just Rhodesia, broke away from the British Commonwealth in 1965 in a Unilateral Declaration of Independence after the Prime Minister Ian Smith disagreed with pressure placed upon the country to broaden its parliamentary framework to include the African majority.

Mozambique and Angola were colonies of Portugal, which was under an authoritarian right-wing dictatorship until 1974. By the time that these two colonies gained independence in 1975, a ten year civil war had been fought in Angola, in which both the West and the Soviet blocs intervened, and soon after independence, Mozambique was drawn into a conflict between political groups backed by the West and the Soviets. These nations in Southern Africa allied themselves with the West, primarily the USA and the UK, portraying themselves as frontline states in a war against communist aggression, and in the Cold War era, this ensured that the Western powers supplied these countries (directly and by proxy) with military, political and economic support. At most times over this thirty year period, the systematic racism of these countries was overlooked in favour of their anti-communism.

Beginning in the late 1950s, anti-apartheid movements began in several Western countries (such as the UK, the USA and the Netherlands), highlighting the racism of the apartheid system in South Africa, as well as its neighbouring states, South-West Africa and Rhodesia. These movements boomed in the late 1960s and early 1970s and called for a series of economic, trade, cultural and sporting boycotts against these regimes. For many in the Western world, as well as in the Eastern Bloc and the ‘Third World’, apartheid was an anomaly in the post-war era, which should have been relegated to history like Nazism, fascism and European colonialism. Writing in 1976, Jack Woddis, a member of the British AAM, wrote:

Southern Africa clings on, a last stubborn outpost of a past epoch. White rule in South Africa, Zimbabwe and Namibia is an anachronism. History has passed its verdict. Apartheid and all its works must go.

During the 1970s, things started to move faster in Southern Africa. As mentioned above, Mozambique and Angola gained independence from Portugal, which spurred the Zimbabwean national liberation movement towards victory in its struggle against the Smith regime, despite the military intervention by South Africa. Rhodesia/Zimbabwe, alongside Angola, became the frontline warzone in Southern Africa, with the fight between Patriotic Front (made up of the Soviet-backed ZAPU and the Chinese-backed ZANU) and the Rhodesian/South African armed forces, supported (at least by supply of weapons) by the US and the UK.

As Matthew Cheney has shown, Soldiers of Fortune magazine highlighted the conflict and acted as a recruiting agent for mercenaries and paramilitarists from across the Western world, particularly from the USA. This pamphlet, produced in the late 1970s, also shows the vast amount of recruiting done by the Rhodesian regime in South Africa and the propaganda that promoted the idea of a racialised anti-communism linking the two countries. Declaring that Rhodesia and South Africa were fighting for ‘the West’, the pamphlet states:

The truth of the matter is that the West has lost the will to fight to defend the principles and values that made them great. They are in fact so fearful of having to fight that they have devised a number of ploys to appease any Soviet or Black demand made on them. This appeasement is called ‘détente’ or ‘human rights’ or ‘majority rule’ and the results are always the same; multiracial democracy must give way to black socialist dictatorship!

This racialised anti-communism also made South Africa and Rhodesia popular symbols of white supremacy for fascists and neo-Nazis across the world. As the Africa is a Country blog has shown the far right in the United States has long celebrated South Africa and Rhodesia as bastions of anti-communism and white supremacy. More recently in 2007, the Southern Poverty Law Centre reported that the South African apartheid-era activists Arthur Kemp, who had extensive ties with the British National Party, was liaising with several neo-Nazi groups in the US.

The British fascist movement had long flirted with apartheid South Africa and Rhodesia. The first leader of the National Front, A.K. Chesterton, spent much time in South Africa during the 1960s, attempting to foster links between the apartheid regime and his fascist groups in the UK, firstly the League of Empire Loyalists and then the NF. Anti-apartheid activist Brian Bunting wrote in the late 1960s that Oswald Mosley and several of his associates had visited South Africa and had meetings with top-level figures inside the nationalist government. According to Bunting, Mosley declared during one visit to the country, ‘I think South Africa is one of the healthiest places in the world’. In the UK itself, a ‘tradition’ amongst NF and BNP members in the late 1980s was to attempt to attack the non-stop picket outside the South African Embassy in Trafalgar Square as an expression of solidarity with the apartheid regime.

Australia’s neo-Nazis also expressed ‘solidarity’ with South Africa through attacks on anti-apartheid activists and organisations. Most notably, the former leader of National Action, Jim Saleam, was jailed for a shotgun attack on African National Congress representative Eddie Funde in 1989, while the Pan-African Embassy (a protest structure outside the South African Embassy in Canberra) was allegedly firebombed a year later. A national inquiry into racist violence held in 1991 found that members of National Action and other far right organisations had maintained a campaign of intimidation and harassment against ANC and SWAPO (South West Africa People’s Organisation) representatives in Australia.

Although both Rhodesia and apartheid South Africa have disappeared, these former regimes are held up by racists across the world as examples of white supremacy ‘betrayed’ by the liberalism of the Western world. Like the Confederate flag (or the swastika), the flags of Rhodesia and apartheid-era South Africa are historical symbols used by the far right to ‘remember’ idealised versions of the past, where white people were able to assert their supremacy. To the rest of the world, they represent racism, violence and murder on a systematic basis.