The latest round of government papers from the Thatcher era have been released by the National Archives, this time relating to documents from 1986 to 1988. Amongst the papers that have been released is a Prime Minister’s Office file (PREM 19/1783) relating to the 1985 riots in Handsworth and Tottenham, continuing on from these files (PREM 19/1521 and PREM 19/484) which started after the 1981 riots in Brixton (I have discussed these files previously here and here).

One of the things that stood out from reading this file is the continued opinion of Thatcher’s adviser, particularly that of Hartley Booth, that the riots were organised in advance by criminal elements and that those involved were ready to use an arsenal of deadly weapons. As the last tranche of files released by the National Archives showed, in the aftermath of the 1985 riots Booth had claimed in memos to the Prime Minister that criminal elements and outside agitators from the far left had been involved in fanning the flames of disorder. This repeated a claim made by other advisers to Thatcher and the Home Secretary, Leon Brittan, that various left wing groups had been involved in the 1981 riots as well.

Private reports from the police indicate further likely trouble in Tottenham. A milk float, complete with a very large number of bottles likely to be used in petrol bomb-making has been abducted in the last fortnight. Also, there have been several reports since 25 October that the ingredients for napalm [REDACTED] have been supplied to individuals in the Tottenham area. If Napalm is used, the police will require a new form of protective clothing. In Northern Ireland, the only known defence against Napalm is plastic bullet, which kept the users of this deadly material beyond throwing distance.

However Booth admitted in another memo, written on 19 November, that both of these claims were merely rumour and the police had not yet confirmed either the use of petrol bombs being made in bulk or that there were more than one instance of a rare ingredient (incidentally used in napalm) being purchased in a North London chemist. Booth reported to the Prime Minister:

Home Office and police do not at the moment feel the situation is serious, as there is no confirming evidence of iminent [sic] disorder.

Despite Booth eventually admitting that these use of petrol bombs and napalm by rioters was just a rumour, it does demonstrate that those advising the Prime Minister on matters of policing and public order were liable to believe the worst case scenarios. If taken at face value, this may have led to an escalation of the hostilities between the police and the public. If the government and the police were expecting that these weapons were to be used and that the only option was the pre-emptive use of plastic bullets and other forms of militarised policing, then these rumours could only add to the already existing tension. Plastic bullets had been stockpiled by the Metropolitan Police since the 1981 riots and along with the use of teargas, represented the use of policing techniques developed in Northern Ireland being redeployed on the mainland. Although plastic bullets have never been used in a public order situation in England, Scotland or Wales, the fact that people within government circles believed that they were necessary for police to use against the public (and in the case of Booth’s advice, pre-emptively) is a worrying thought. 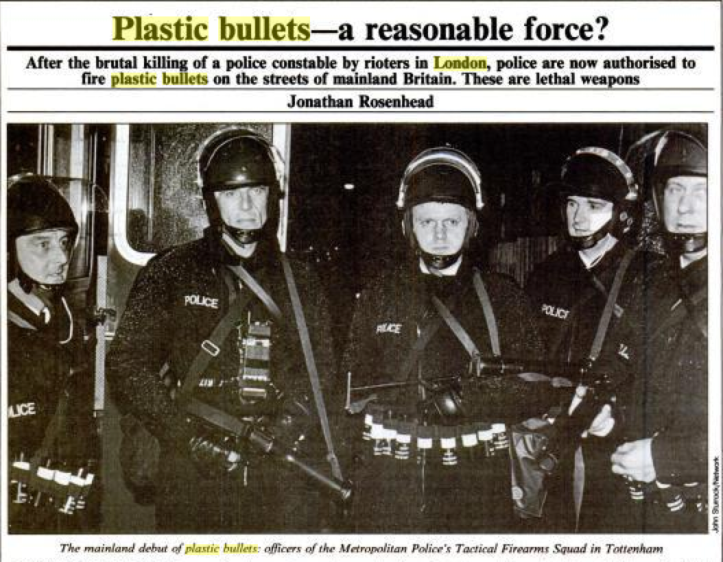 Booth also maintained that the riots in Handsworth in September 1985 were organised by criminal elements and claimed that a police report (not included in the file) supported his view. In a covering memo to Thatcher, dated 26 November, Booth argued:

The degree of organisation among the rioters is well documented in this report… The report boldly concludes that the first riot was orchestrated by local drug dealers. This we suspected at the time, but had formerly been denied by the police.

In the same document, Booth suggested that the riots had an ‘appalling racial element’, stemming from a jealousy amongst West Indian drug dealers relating to the suspected wealth of Handsworth’s South Asian community.

In an interview with journalist David Dimbleby, Lord Scarman, who had led the inquiry into the 1981 riots in Brixton, seemed to suggest something similar and in a transcript included in the file, stated:

In 1981, we were not faced with the intrusion of organised crime, making use of disaffected youth. That is the new factor. It is a very dangerous factor and it has to be tackled…

Booth used this statement to reinforce his argument to Addison and Thatcher that organised criminals had been at the centre of the riots. However a Home Office letter to Addison by Stephen Boys Smith, written in January 1986, admitted that the ‘police view remains that there is no evidence of long term planning of the riot.

Booth and another adviser to Thatcher, Oliver Letwin, have been lambasted in the media for another revelation in this tranche of released documents for suggesting that government grants to inner cities community groups would be spent on ‘disco and drug trade’ (see here and here). However these documents suggest that Booth’s advice to Thatcher on public order and community policing issues had even more potential for wide-reaching problems, stemming from a prejudiced outlook on Britain’s African-Caribbean communities and the political organisations of the left.