Oxford, ‘no platform’ and free speech battles: A short history 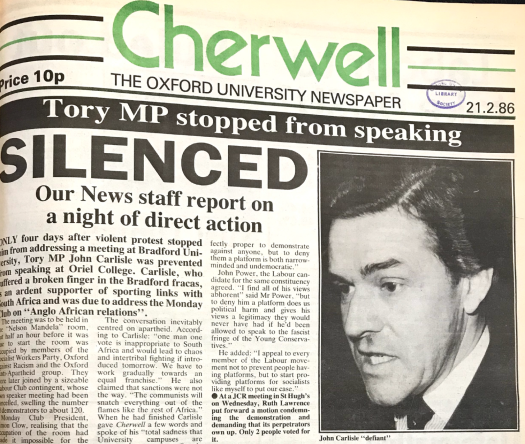 This week former Home Secretary Amber Rudd, who was in charge of the Home Office at the time of the Windrush scandal in 2018, was disinvited by the UNWomen Oxford Society after originally inviting Rudd to speak for International Women’s Day. According to The Guardian, Oxford’s African Caribbean Society claim that they didn’t call for Rudd to be cancelled nor did they plan to boycott the talk, after suggestions were made by the UNWomen Oxford Society. Nevertheless, this story has added fuel to the perception that there is a free speech ‘crisis’ at British universities today and resulted in numerous calls for places like Oxford University to remain a bastion of free speech.

These calls are misleading because there is a long history of students attempting to prevent controversial figures from speaking at Oxford, through the formal use of a ‘no platform’ policy, or by picketing, or disrupting the event in some way. Pressure and protests from students has led to the revoking of invitations to speak on several occasions, while at other times, speakers have sought to face down hostile crowds (both successfully and unsuccessfully).

In the early 1960s, former British Union of Fascist leader Oswald Mosley was invited to speak at the university by student groups. In a 1961 debate on apartheid South Africa with future Liberal leader Jeremy Thorpe, students heckled and attempted to disrupt Mosley from speaking. Mosley’s newspaper Action complained about the ‘ape-like grunts, yells, screams from hysterical females, and even rattles’ coming from protestors in the audience. A few days later, Mosley spoke again at Oxford, this time to the Humanist Group, debating Marxist scholar Raymond Williams. The student newspapers at Oxford, Cherwell reported on the hostile reception that Mosley received:

Heckling, hisses and boos swelled from an opening disturbance to an overwhelming uproar at Sir Oswald Mosley’s address on ‘Racial Purity’ on Tuesday. Shouting at the top of his voice, Sir Oswald was finally drowned out by chants of ‘Seig Heil’, cheers for Hitler and choruses of booing…

Violent protests and allegations from the largest-ever Humanity [sic] Group audience, packed into The Taylorian, interrupted Sir Oswald’s speech constantly, and his voice was drowned in uproar… 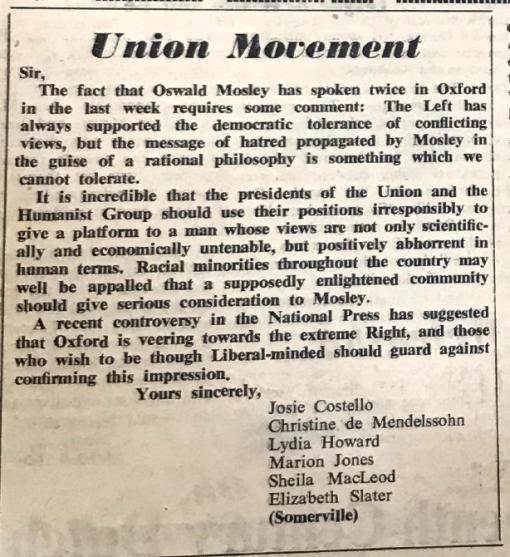 In 1966, the neo-Nazi Colin Jordan was invited to speak by the Oxford Union, but as Paul Jackson notes, ‘this event was subsequently cancelled as the organizers felt that the event would only end up being wrecked by opponents.’

After the National Union of Students introduced the policy of ‘no platform’ in April 1974, it quickly became a flashpoint. Harold Soref, a right-wing Tory MP and Vice Chairman of the Monday Club (an anti-immigration and pro-empire pressure group within the Conservatives), was invited by the Oxford University Monday Club branch. One of the purposes of this invitation, the Oxford branch president admitted, was to openly challenge the ‘no platform’ policy taken by the NUS.

However things did not go according to plan for Soref or the Oxford branch of the Monday Club. Around 20 to 40 students disrupted Soref during his speech, smashing a window of a barricaded door to enter the Monday Club meeting. The Daily Telegraph reported that while the audience tried to prevent the demonstrators from gaining access to the room, ‘Mr Soref, escorted by a posse of students, fled down a back staircase, clambered over a six-foot wall and was driven off at high speed in a waiting yellow sports car’. Although the action was condemned by the Oxford University Student Union and the leaders of the Conservative, Labour and Liberal clubs at the university, the protest did demonstrate the level of opposition that some students had to the hard right politics of the Monday Club, which at the time had some crossover with the National Front, but also with Enoch Powell.

The mid-1980s became a time when a number of speakers, in particular hard right politicians, but also others, were protested against on campus and like elsewhere, students sought to prevent them from speaking at Oxford. Events at Oxford, as well as on campuses across the country, led to the media and politicians claiming that there was a crisis of free speech at British universities, reminiscent of what is occurring today. In March 1985, the Oxford Union invited the South African Ambassador, Denis Worrall, to speak, alongside the South African ‘coloured’ cabinet minister Allan Hendrickse and Bantustan leader, Chief Gatsha Buthelezi. Following a protest by Oxford students and the local branch of the Anti-Apartheid Movement, all three withdrew from the debate, which was subsequently cancelled.

In November of the same year, the Brasenose Debating Society had invited the National Front’s Patrick Harrington to speak (who had previously been the subject of massive student protest at North London Polytechnic throughout 1984). This led the student union at Oxford to implement a ‘no platform’ policy, encouraged by the Socialist Workers’ Student Society and the Student Union’s Anti-Racist Committee. The Committee argued that Harrington’s ‘mere presence [was] an insult to students, especially non-whites’ and that ‘[t]here should be no racist platforms in the University – they lend enormous credibility to such views.’ The NUS supported this approach and the NUS Policy Officer was quoted in Cherwell as saying:

However academic the debate in Brasenose may be, the fact is that Harrington has been on record as endorsing firebombing attacks on NF opponents and shouldn’t be given any platform at all.

This upset the Oxford University Conservative Association, which led a campaign to have the policy overturned. Eventually a referendum was held by the student union on the policy in February 1986. This occurred at the same time as hard right Tory MP, John Carlisle, was invited to speak at Oriel College by the Monday Club branch at Oxford.

This came a short time after protestors had been in an altercation with Carlisle at Bradford University. Scheduled to speak in the ‘Nelson Mandela’ room at Oriel, the room was occupied by about 120 protestors from the SWP, the Labour Club, Oxford Against Racism and the Oxford Anti-Apartheid group. Upon advice from the police, the Monday Club decided to cancel Carlisle’s talk at the university and under police escort, travelled to the city centre, where Carlisle addressed a very small audience. Speaking to Cherwell, Carlisle complained:

It’s a sad day when Oxford University students prevent an MP from putting his views forward. What worries me about tonight is that it’s a copycat demonstration – just mimicking Bradford.

The President of Oxford University’s Monday Club, Simon Clow, criticised the police for being ‘too eager to avoid trouble rather than protect free speech’.

In 2001, the Oxford Union invited Holocaust denier David Irving, who had lost a high profile libel case the previous year. Protests came from the NUS, the Association of University Teachers and Lord Janner from the All-Party Parliamentary War Crimes Group, with the AUT General Secretary suggesting that the union would contemplate an academic boycott of the Oxford Union. Eventually the Oxford Union rescinded the invitation in the face of these protests.

Irving was invited by the Oxford Union again in 2007, to speak alongside the British National Party’s Nick Griffin (at a time when the BNP was nearing its electoral heights). This caused major concern amongst students at Oxford and amongst anti-racist and anti-fascist campaigners more broadly. President of the Oxford University Student Union, Martin McClusky, strongly argued against the invitations and called it ‘utterly appalling’, adding:

It sets a really disturbing precedent. The Union being a student run society, it sends out the wrong sort of message. All this is doing is giving them a platform in a prestigious arena…

On the night of the debate, protestors forced their way into the building where the debate was taking place in an attempt to disrupt the event. While students had previously had success with ‘no platforming’ Griffin at various universities (such as Cambridge, St Andrews and Bath), they were not able to successfully disrupt the event at Oxford.

In recent years, the Oxford Union has invited several far right speakers, including the English Defence League co-founder Tommy Robinson, former Trump adviser Steve Bannon, Marine Le Pen and Marion Maréchal-Le Pen from the Front National in France and Alice Weidel from Germany’s AfD. There were protests against all of these invitations, but pressure from students and activists was only enough to force the cancellation of Weidel’s talk, while the rest went ahead (although Marine Le Pen’s talk was slightly delayed by protestors). 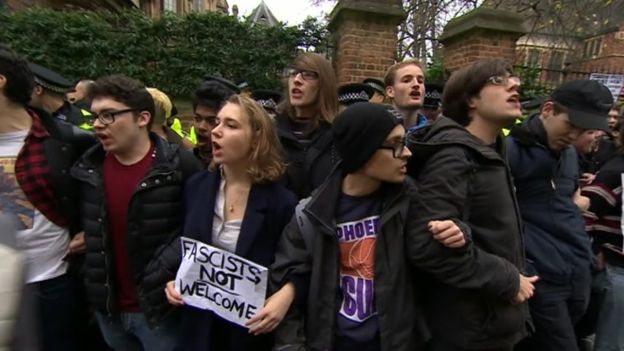 The controversy over the disinvitation of Amber Rudd (the details of which are not fully known yet) should be seen within a longer history of student actions against controversial speakers at Oxford University. On some occasions, students have been able to compel the cancellation or disinvitation of certain speakers, whereas on other occasions, students have sought to physically or vocally disrupt speakers. Those concerned with the contemporary ‘crisis’ of free speech at British universities suggest that ‘no platforming’ right wing politicians and other figures is something new and that students are much more censorious nowadays. However the actions at Oxford University since the 1960s, replicated at other universities across the country over the last six decades, show that this is not the case. Press hysteria and outrage from politicians about the alleged shutting down of free speech at Oxford (and elsewhere) has existed since the 1960s – a perpetual crisis or merely the playing out of similar tropes by the right?