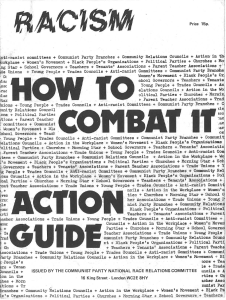 In 1978, the Communist Party of Great Britain produced two pamphlets dealing with anti-racism and anti-fascism. One was A Knife at the Throat of Us All: Racism and the National Front by National Organiser, Dave Cook. The other was Racism: How to Combat It by the CPGB’s National Race Relations Committee. Cook’s pamphlet outlined the history and theory of racism and anti-racism in Britain, with particular reference to the threat posed by the National Front. The pamphlet produced by the NRRC was a much more practical document, outlining the various ways in which Communist Party members and other labour movement activists could participate in anti-racist actions in a variety of settings.

Coming soon after the revised British Road to Socialism, which pushed for a greater emphasis on the new social movements, these two pamphlets outlined the importance of anti-racism and anti-fascism was for the CPGB in the late 1970s. However as my forthcoming book shows, it was difficult at times for the Communist Party to integrate itself into the anti-racist movement, even though the Party had a long history of anti-racist campaigning.

As part of the efforts by various people to digitise the ephemera of the global left, I have scanned a copy of the NRRC pamphlet, which can be found here.