The kind folk at Routledge sent me a copy of Searching for Lord Haw-Haw to review as promotion for their new Fascism and Far Right series and I am delighted to review the book below. 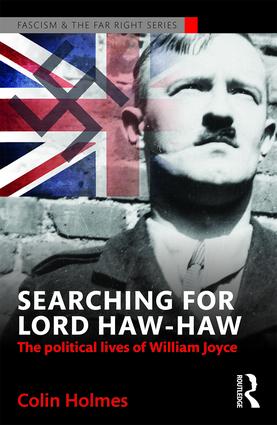 After Oswald Mosley, William Joyce (infamously known as Lord Haw-Haw) is probably the most well-known British fascist of the inter-war period. A leading member of Mosley’s British Union of Fascists (BUF), Joyce was forced from the party in 1937 and after passing through a series of pro-German groups and societies in the lead up to the war, fled to Berlin in the days before the Second World War started. Joyce joined a small bunch of English-speakers in Nazi Germany who worked for Joseph Goebbels’ Propaganda Ministry, who broadcast pro-Nazi material over the airwaves and wrote similar tracts for distribution in German POW camps and elsewhere. As the deftest of these propagandists, Joyce became known as ‘Lord Haw-Haw’ to British listeners, who remained unaware of Joyce’s real identity (although several MI5 staff suspected that he was Haw-Haw). Captured by British soldiers trying to escape Germany at the end of the war, Joyce was repatriated to Britain to stand trial for treason. Despite having an American birth certificate (and hence US citizenship), Joyce was found to betrayed his allegiance to the British Crown and was hanged in early 1946.

Although there have been studies of Joyce’s life before, Colin Holmes, an expert historian on anti-Semitism in modern Britain, has undertaken considerable new research to bring a more well-rounded picture of Joyce and his motivations, both personal and political. Born in the United States, his family traveled to County Galway when he was a child and was a pro-Unionist protestant throughout his youth. Despite Holmes’ diligent research, there are aspects of Joyce’s life in Ireland that are unknown and the first chapter is possibly the weaker section of the biography. However his recruitment as an informant for the Royal Irish Constabulary during the Irish War of Independence and the battles he had with local Irish Republicans, explored in detail by Holmes, is important, because it shapes his future political outlook – fiercely pro-British, a believer in British imperialism and willing to be involved in political violence.

Moving to England in the 1920s, Joyce fancied himself as an academic and tried to pursue a career in English literary studies, while at the same time joining the Conservative Party. Soon Joyce found the Tories too timid and became involved the British Fascisti formed by the eccentric Rotha Lintorn-Orman. Joyce and future Imperial Fascist League leader Arnold Leese both joined a splinter party from the BF called the National Fascisti before Leese formed the Imperial Fascist League in 1929 and Joyce joined the BUF in 1932. One of the interesting things about Joyce for historians is that his journey on the right hand side of politics saw him travel through almost every organisation on the far right and Holmes does a great job to explore the various small and sinister organisations that Joyce encountered in both the 1920s and 1930s.

Joyce did not join Oswald Mosley’s New Party, but was an early member of the BUF, formed in late 1932 after Mosley travelled to the continent to witness Italian fascism in person. Joyce soon found himself in a leading position within the BUF and was known as a confident, yet vitriolic, public speaker. Holmes shows that Joyce gained considerable influence within the BUF during his tenure, but as his star rose, his relationship with Mosley soured and was eventually excluded from the BUF in early 1937.

From the time that he was kicked out of the BUF until his leaving for Germany in August 1939, Joyce, again, was involved in a number of organisations on the British far right and who pushed for stronger links between Britain and Germany. As well as the National Socialist League that he founded with fellow ex-BUFers John Beckett and John MacNab, Joyce was also associated with the Nordic League, the Anglo-German Fellowship and the Right Club. Despite a small number of wealthy benefactors, Holmes shows that Joyce was always looking for sources of income for his political ventures and his associations with many of those who pro-German were as economically motivated as they were political. Holmes also shows that MI5 had penetrated deeply into these circles by the late 1930s, although they were unable to detain Joyce before he fled to Germany in the month before the war.

Joyce and his wife moved to Germany just before the outbreak of the Second World War, using his British passport to leave the country, but not becoming a German citizen until after the war started. For several months in the early days of the war, Joyce assisted the Nazis while holding a British passport, even though he was born in the United States, and was later to be a naturalised German. This is an important detail which becomes relevant at this 1945 trial. Holmes emphasises the irony of the extreme British patriot having to renounce his British citizenship and pledge allegiance to a foreign power during the time of war.

While in Germany, Joyce worked for Goebbels’ Propaganda Ministry and while also authoring works on Germany’s future triumph over Western Europe and the bankruptcy of modern Britain, he was most well-known for broadcasting Nazi propaganda in English. Although he was not the first Lord Haw-Haw, a pseudonym used by several different broadcasters, Joyce came to personify the character. Looking at the effect that Lord Haw-Haw’s broadcasts had upon British morale during the war, Holmes uses Mass Observation records to show that while many British listeners dismissed Lord Haw-Haw’s ravings and thought of him as foolish, others were perturbed by his message, particularly as these broadcast often included information about Allied losses not covered in the British media. The book also shows that from the very beginning, the security services were also listening to Lord Haw-Haw and had been informed by several contacts that the voice of Haw-Haw was indeed Joyce.

Holmes depicts how Joyce, who desired attention and praise from his German employers, was given favourable treatment in the early years of the war, but as the war dragged on, this favourable treatment dried up and Joyce started to resent living in a country where wartime restrictions were so harshly felt. Increasingly plagued by alcoholism and abusive towards his wife, Joyce raged against his situation. As the Soviets got closer to Berlin, Joyce and his wife fled westwards and Joyce was eventually captured near the German-Danish border in late May 1945 by British soldiers, who shot him in the buttocks during a quick scuffle. Injured, he was taken back to Britain and within a few months was to be put on trial for treason.

The prosecution of Joyce was complex as it hinged upon the fact that Joyce, although an American citizen by birth, had travelled to Germany on a British passport and from the outbreak of the war until July 1940 (when he and his wife became naturalised German citizens) had broadcast at the behest of the Nazi regime, who were at war with Britain. Holding a British passport implied allegiance to the British Crown and by working for the Nazis while holding this passport, the prosecution argued, Joyce committed treason. Joyce was convinced that his American birth certificate would save him, as it had Eamon de Valera who was pardoned for treason after the 1916 Easter Rising.

Holmes navigates the intricate legal arguments put forward by both the prosecution and defence, though both the initial trail and the appeal. The reader is left with the impression that the successful prosecution and the upholding of the guilty verdict was a controversial interpretation of the law as it stood, with a suggestion that it was unlikely that Joyce would be ever be found not guilty. Once the guilty verdict was upheld in December 1945, execution was quick to follow and in early January 1946, Joyce was hung at Wandsworth Prison in London. Joyce seemed to have accepted his fate and according to Holmes, showed little regret for his political views and where they had led him since the 1920s.

Colin Holmes has done more than write a biography of Joyce, with a book that also explores the social history of the British far right in the inter-war period, outlines the intrigues of the British security services during this era and delves into the legal history surrounding Joyce’s trial for treason. It is an enjoyable read that uses the life of Joyce to traverse down a number of historical paths, tying together several fields of historical scholarship. Overall an ambitious, yet very accomplished, book.

You can order a copy of Searching for Lord Haw-Haw here.