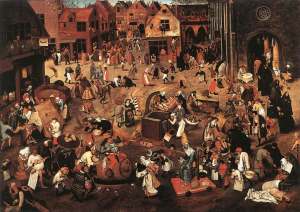 The History Carnival continues and like Bakhtin would have wanted, here it comes to distract us all from our work (As Shit Academics Say reminds us, ‘You should be writing”). Hatful of History is delighted to bring you a selection of the recent bloggings on history and/or by historians.

The terrorist attacks in Paris last month brought out several different historical issues on what Brett Holman coined the ‘historioblogosphere’ (or the ‘unorthodox scholarly publishing platforms’ as Melissa Castan has phrased it). Peter Frost in the Morning Star looked at an earlier massacre in the French capital, the killing of over 200 protestors marching against the French occupation of Algeria in October 1961. Mark Humphries, guest posting at Historian on the Edge, rebuked Niall Ferguson’s lazy comparison between the global West’s ‘war on terror’ and the fall of the Roman Empire. And the anti-immigrant hysteria after the attacks was critiqued at Frog in a Well, using the example of the internment of Japanese Americans in the USA in the Second World War.

Other news stories, such the British MP John McDonnell’s quoting of Chairman Mao’s Little Red Book in the House of Commons, led to Adam Cathcart at The Conversation to explain the hullabaloo was all about and why such a little book is so important. In more local British news, an archaeological project by the University of Reading at Glastonbury Abbey gave rise to a discussion, over at the Clerk of Oxford, about the use of the legend of King Arthur by monks at the Abbey over the centuries.

Those who have not been fortunate enough to escape the legal gaze have been the urban poor, who have often had to beg to maintain their existence. Brodie Waddell at The Many Headed Monster looks at the disparaging terms used to describe beggars historically and the use of the term ‘rich beggar’. On the urban poor in the twentieth century, the blog ‘Labourers, Porters, Charwomen and Needlewomen’ discusses those who lived on Tiger Yard Camberwell estate in 1930s London. At the Perceptions of Pregnancy blog, George Campbell Gosling explores how class, money and ‘respectability’ all informed how women were treated in maternity hospitals in the inter-war period before the establishment of the National Health Service. Still on the subject of hospitals, Helen King at Nursing Clio has looked at the history of x-rays and the treatment of the wrists over time.

Keeping with the first half of the twentieth century, Brett Holman at Airminded has argued against using the term ‘blitz’ to describe aerial bombing in the First World War. And tenuously, one of the German cities that was the recipient of much aerial bombing in the Second World War was Dresden, which then had the (possibly mis-) fortune of being rebuilt while part of the German Democratic Republic. Dresden has been, for many, a symbol of the downside of German reunification since the 1990s, but many were cheering, as The Old International noted, when local football team Dynamo Dresden unfurled the largest banner in Europe. November also the anniversary of the collapse of East Germany and Ned Richardson-Little blogged about the ‘long fall’ of the Berlin Wall at his new blog, Superfluous Answers to Necessary Questions.

While historians have focused heavily on the reasons why the GDR collapsed in 1989, there is also a growing literature on GDR (and the rest of the Soviet system) and their international solidarity with the ‘Third World’. The Imperial and Global History, run by the University of Exeter, featured another outstanding post on Soviet internationalism and Latin America by Tobias Rupprecht. At the African American Intellectual History Society blog, Reena Goldthree has written about an earlier form of internationalism, Garveyism and Pan-Africanism, and attempts by Garveyites to create a global mass movement, which rivalled the anti-colonialism of the inter-war Communist International. As well as fractious relationship with various national liberation movements, the international communist movement had problems with the women’s movement during the inter-war period. Writing at the University of Sheffield’s History Matters blog, Ben Lewis explores the role that Clara Zetkin played as a leading figure in the Bolsheviks and her role in the women’s movement.

Based on the research done by University College Dublin’s Mary McAuliffe, the Dublin Inquirer’s Louisa McGrath has also written recently about revolutionary Irish women and looks at the role that these women, particularly lesbians, played in the 1916 revolution. With next year being the centenary of the 1916 Easter Rising, Liam Ó Ruaric has outlined at the Irish Revolution blog, the global significance of the revolution.

Lastly, Sharon Howard, in last month’s History Carnival at Early Modern Notes, asked where history was going next. Lucy Robinson’s exciting blog post on mass observation and her diaries from the 1980s throws up ideas about the new directions that history may take us. And over at the University of Birmingham’s Modern British Studies blog, Kathryn Robinson writes about using 1980s sitcoms to analyse Thatcherite Britain.

So keep blogging! And reading blogs! And if you read something great over the next month, use the History Carnival nomination form. Art and Architecture, Mainly is up next on January 1, 2016.