Although there was no uniform policy across the British Empire, in South Africa and Australia, ‘natives’ were discouraged from enlisting in the armed forces during the Second World War and if enlisted, were not provided with the same level of training and equipment given to white soldiers. In both countries, the Communist Party were one of the groups that agitated for their enlistment into the armed forces and to be given the same training and equipment as all other soldiers. The Communist Parties of South Africa (CPSA) and Australia (CPA) had supported the war effort ever since the invasion of the Soviet Union in June 1941 and called for a ‘people’s front’ against the Axis Powers. Both the CPSA and the CPA had long histories of anti-racism and fighting for the rights of the indigenous populations in both countries, as well as a long involvement in anti-colonialist activism.

At the outbreak of the war and following the Nazi-Soviet Pact, both the South African and Australian parties denounced the war as an ‘inter-imperialist war’ between rival imperial powers and argued that there was not difference between fascism and British/French colonialism. For Australia’s Indigenous and South Africa’s black populations, the horrific treatment they experienced at the hands of the government (and part of the British Empire) seemed in some ways to confirm this argument. The CPSA wrote in a 1940 leaflet:

It is an insult to the intelligence of the African, Coloured and Indian people to ask them to fight against a system of Nazi tyranny when they themselves suffer under terrible oppression and injustice.

However when the Soviet Union entered the war, the Communist Parties wholeheartedly supported the war effort and attempted to encourage the indigenous populations in South Africa and Australia to also support the war, even though this would mean, in the short while, supporting British colonialism and its Dominions. In a CPSA pamphlet from early 1943, the Communist Plan for Victory, the Party acknowledged that the racism faced by black and other ‘non-white’ South Africans discouraged them from supporting the war effort and that fascist propaganda exploited this. The pamphlet said:

It is this system of White domination that the Japanese propagandists have relied upon to gain sympathy from non-White peoples and weaken the Allied nations.

The same pamphlet warned that if fascism was victorious, things would be worse than under present system:

A victory for Fascism means more race oppression and the adoption throughout the world of a deliberate policy of reducing the conquered peoples to a position of serfdom.

A Hitlerite victory will mean for the non-White peoples of South Africa the adoption of a rigid policy of racial discrimination and segregation, the loss of even the few democratic rights which they now possess, the forcible suppression of their national organisations and trade unions, and the rule of the sjambok.

In 1942, the black General Secretary of the CPSA, Moses Kotane, wrote a pamphlet, Japan – Friend or Foe?, which called for the ‘non-Europeans’ in South Africa to realise that the Japanese would not provide them with their freedom and it was time to support the war effort, and prepare to push forward with the struggle for national liberation:

Our country is in danger of being invaded by the enemies. It is our duty to see that no enemy is allowed to come here. In doing so we shall be fighting for our own freedom. We must demand that non-Europeans be properly trained in the use of arms and be armed to defend our country; that we be trained for and allowed to do skilled work; that all soldiers, irrespective of colour, be treated alike as regards pay, conditions and chances of promotion; that the Pass Law and Poll Tax, segregation and trading restrictions be abolished.

The CPSA proposed that this would give non-Europeans an equal share in the eventual victory over fascism and would prepare them:

for the period after the war when they will have to play their part in building up a Socialist South Africa.

The Communist Party of Australia advocated a similar argument for the Indigenous population of Australia and their enlistment into the war effort (although it was not as central to the Party’s programme as the South African party). In an issue of the CPA’s weekly paper Tribune from July 1942, the CPA called for Indigenous soldiers to be given modern weapons as the authorities were reluctant to arm them. The British had not armed the local populations in several South Asian countries and the islands near Australia and the CPA argued against this policy, which also affected Indigenous people in Australia. The article claimed:

The heroic Chinese guerillas have often fought with even less than spears. They fought for their homeland, their national liberty.

Australian Aborigines will fight in the same way – to disarm them means disarming allies in the face of an enemy. Why not give them modern arms? Teach them to use these, and produce some of the best guerilla fighters this war has known? 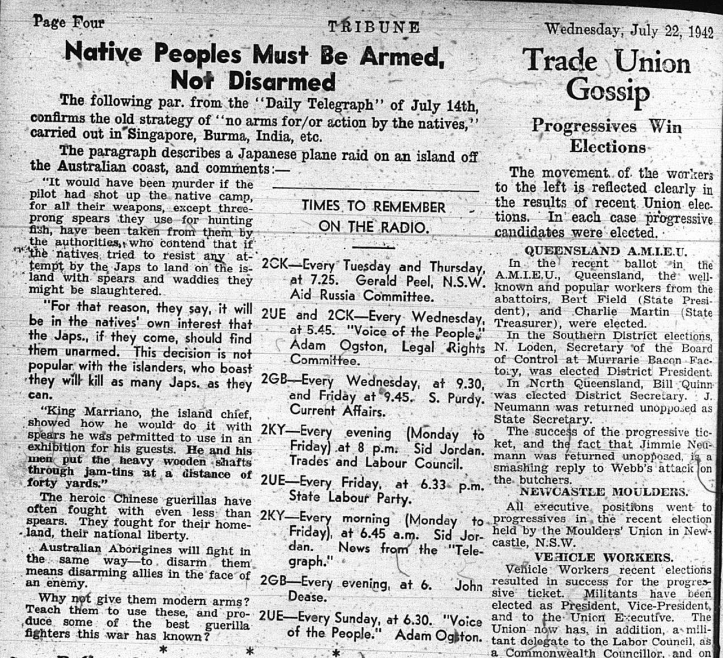 Although accused by some of swapping the anti-imperial struggle for an alliance with the national bourgeoisie that ruled the British Empire, the Communist Parties of South Africa and Australia emphatically supported the war effort after June 1941 and promoted this as a progressive war against fascism and racism. Part of this anti-fascist and anti-racist struggle was campaigning for the end of racial discrimination within the armed forces, who were at the forefront of the war effort (although few indigenous soldiers from either country were sent overseas). Both the CPSA and the CPA were amongst the few groups to call for the integration of indigenous soldiers into the rest of the armed forces and to be provided with the same training and equipment as other soldiers. This is an overlooked part of the history of both parties, their anti-racist activism and the Party’s contribution to the war effort in both countries. Seventy years on from the end of the Second World War, this history is worth exploring further.