Thatcher, the Brighton bombing and the British left 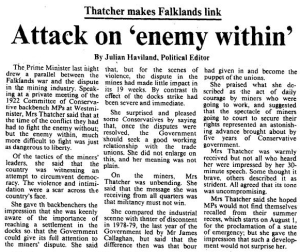 Like July 1981, October 1984 was a crisis point for Margaret Thatcher’s Conservative government. The miners’ strike was now six months in and Thatcher faced possible strike action by the pit deputies’ union, Nacods, which would have increased the severity of the strike. If Nacods had initiated strike action, many believe that Thatcher would not have been able to endure the effect that it would have on the British economy. In July 1984, Thatcher had addressed a private meeting of the 1922 Committee, a pressure group within the Conservative Party, and has referred to the miners as the ‘enemy within’. From papers released by the Margaret Thatcher Foundation this month, we now know that she was going to return to this theme at the Conservatives’ 1984 Party Conference, to be held in Brighton.

However the Brighton Conference became known for a different set of events. On the morning of October 12, 1984, a bomb planted by the Provisional IRA exploded in the hotel hosting the conference. Five people, including one MP, were killed and another 31 were injured. It was revealed this week that Thatcher ripped up her original ‘enemy within’ speech and gave a defiant speech to those who remained at the conference.

In the week of the bombing, the Tories lead over Labour was 2 per cent, according to The Guardian/ICM polls, but this rose to 9 per cent the following month. The Tories experienced a fillip in the polls until February 1985 when they returned to a 2 per cent lead. But resentment towards Thatcher was still high and many were unsympathetic about the near miss.

I wondered how the British far left responded to the bombing in the midst of one of the most important strikes in contemporary British history. Thanks to the staff at the Working Class Movement Library in Salford, I was able to get copies of the Morning Star and Socialist Worker from the days following the bombing.

As a way of bit of background information, the Communist Party of Great Britain, to which the Morning Star was still nominally attached at this stage, was opposed to the bombing campaign of the Provisional IRA. At the Party’s 1981 Congress, a resolution on Ireland stated:

Congress unreservedly condemns the military campaign of the Provisional IRA in Britain and Ireland. The result is not just continual violence taking the lives of hundreds more people, Irish and British, but also a deepening political polarisation within the working class in Northern Ireland…

The SWP, on the other hand, supported the Provisional IRA in their struggle against British ‘imperialism’, but did not necessarily condone their bombing campaign. A 1980 pamphlet (scanned by the Irish Left Archive) stated:

As socialists we give full support to all those who fight oppression and for the right of self-determination, whereever in the world they may be. This applies equally to the Provisionals, who are fighting a war against the oppression of a minority in Britain’s oldest colony. But this does not mean that we necessarily support the politics of the Provisionals, nor we consider them socialists, nor that we support all the tactics they use. The Morning Star covered the story on the front page of the newspaper the day after the bombing, complemented by a statement by the paper’s staff under the headline, ‘No to Terrorism’. The statement began with the sentence:

The Provisional IRA bombing of the Grand Hotel in Brighton was a piece of reckless adventurism which should be condemned without reservation.

The statement continued with the proposal that a ‘democratic solution’ to the problems in Northern Ireland (and in Britain) would ‘need not terrorism, but mass extra-parliamentary activity combined with the struggle inside parliament.’ It followed with:

It opens the door of more and more authoritarian measures which are then applied to the left as a whole.

The statement condemned the failure of the British labour movement to effectively mobilise around the issue of Northern Ireland and concluded with this passage:

The failure to grasp this problem, and mobilise the mass movement needed, leaves the vacuum which is then filled by desperate acts of terrorism. 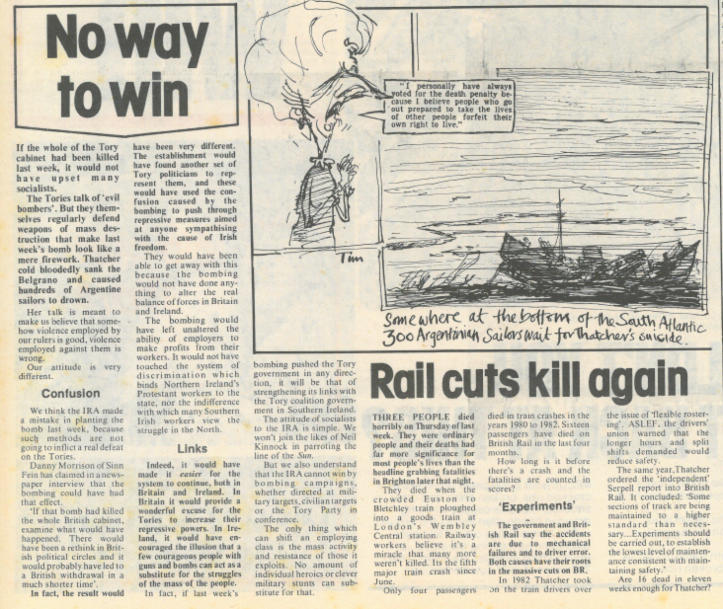 The Socialist Worker in the week following the bombing (20 Oct) did not put the bombing on the front page, instead focusing on the breakdown of ACAS proceedings between the NUM and the government. Coverage of the bombing was relegated to page 2. The paper featured two articles detailing the violence of the British Army and the RUC in Northern Ireland, explaining why the Provisional IRA enjoyed popular support. And like the Morning Star, the paper carried a statement from the SWP on the bombing under the headline ‘No Way to Win’. This statement acknowledged that many socialists would not have been upset if the bombing had inflicted more casualties amongst the Conservatives, but still condemned the bombing as the incorrect way to defeat Thatcher and to remove the British from Northern Ireland. The paper said:

We think the IRA made a mistake in planting the bomb last week, because such methods are not going to inflict a real defeat on the Tories…

In fact, the result would have been very different. The establishment would have found another set of Tory politicians to represent them, and these would have used the confusion caused by the bombing to push through repressive measures aimed at anyone sympathising with the cause of Irish freedom…

Indeed it would have made it easier for the system to continue in both Britain and Ireland. In Britain it would provide a wonderful excuse for the Tories to increase their repressive powers. In Ireland, it would have encouraged the illusion that a few courageous people with guns and bombs can act as a substitute for the struggles of the mass of the people.

The SWP stated that they would not condemn the IRA in the manner of the right-wing press, but also understood that the IRA ‘cannot win by bombing campaigns’. The SWP concluded:

The only thing which can shift an employing class is the mass activity and resistance of those its exploits. No amount of individual heroics or clever military stunts can substitute for that.

I wasn’t able to find copies of Militant or Newsline from this period, but due to the wonders of the internet, I thought it would be interesting to also look at how Red Action, a small splinter group from the SWP dedicated to militant anti-fascism, reacted to the bombing, as all copies of Red Action are now online. The attitude of Red Action towards the bombing is significant because Red Action was probably the most pro-Republican leftist group in Britain at the time. As Mark Hayes has written on his chapter on Red Action in our forthcoming volume on the British far left:

Red Action supported local Irish activities and sustained practical political contact with Republican paramilitary organisations. Red Action believed that genuine revolutionary socialist groups should place Irish national liberation high on their agenda.64 According to Red Action the liberal left in Britain had, in effect, abandoned the issue of ‘Northern Ireland’ when the struggle for civil liberties was transformed into an armed insurrection. Even the Trotskyist left, which had the habit of offering ‘conditional support’ for Republicanism, was decidedly equivocal when it came to the use of armalites and semtex… Red Action, on the other hand, resolved to offer unwavering support.

Issue 15 of Red Action from November 1984 contrasted the IRA bombing with the sinking of the Belgrano by the British (under Thatcher’s orders) during the Falklands War and argued that violence was given a moral worth depending on who perpetrated it. The paper noted that the reaction from the working class towards the bombing was quite muted and that this had changed from the anti-Irish sentiment that was prevalent during the 1970s. It was argued that this latest bombing incident was different because it ‘attacked an obvious and clearly political target’ and because the government ‘had done no favours to the British working class since it had been in office’.

Using the example of the 1981 riots, Red Action stated that the paramilitary policing tactics employed in Northern Ireland were now being used on the British mainland. The group thought that this might create a greater understanding in Britain of the Republican cause. The article finished with this:

Perhaps some of the working class are now beginning to realise that the IRA/INLA are not looney crazed terrorists – just people who realised that the only way that their voice would be heard was by their taking direct physical action against the state.

It cannot be said that the news of the Brighton bomb brought cheers of ‘up the provos’ [sic] but there were plenty of people who thought that it would hsve been better if it had been more successful.

The Brighton bomb gave Thatcher a brief respite from the pressure of the miners strike and public opinion swung behind her momentarily for the first time really ‘since the Falklands War. But many of those who were involved in the strike did not sympathise with Thatcher in the wake of the bombing, although most were critical of the strategies used by the Provisional IRA. The bombing also solidified in her mind that the ‘enemy within’ was a clear and present threat, even though if she wasn’t willing to say it on October 13, 1984 – Irish Republicans, trade unionists, communists, etc, were to be handled with the necessary toughness that the situation required. This line of thinking informed the political and criminal justice outlook of the Thatcher government until its end in November 1990.