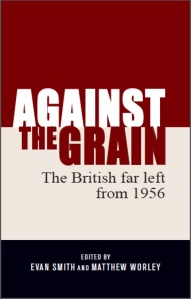 As regular readers of this blog are probably aware, our edited collection Against the Grain: The British Far Left from 1956 will be published by Manchester University Press next month. To publicise the book, I am running a competition through this blog (and hopefully cross-posted with a few others) to win a copy of the book (to be posted anywhere in the world). Below are ten questions on the history of the British far left (ranging from 1949 to 1987), which all have answers that can be found on the internet. Please email your answers to hatfulofhistory@gmail.com. I will hold the competition open until 11:59PM on Monday 6th October (Adelaide time or +9.30 GMT). All of those who get 10 out of 10 for the answers will have their name put in a hat and one winner will be drawn on Tuesday 7 October. The answers and the winner will be posted on this blog once the winner is notified via email. The outcome of this draw will be considered final and no negotiations over answers will be entered into. Sorry, but contributors to the collection cannot enter the competition.

So here are the questions:

Once again, please email your answers by Monday 6th October to hatfulofhistory@gmail.com.

If you aren’t lucky enough to win a copy of the book, you can purchase a copy (for a slightly discounted price) here.

Like Loading…
Previous: Phil BC profiles me for All That Is Solid Blog
Next: Anwar Ditta and the discriminatory border control system