Sectarian hilarity for the left-wing trainspotter! The UK Spartacist League’s papers from 1978-2011 now digitised and online

Taking a break from writing book chapters and ARC proposals, I have been plunging into bizarre world of the Spartacist League (UK) through the recently digitised Spartacist Britain (1978-84) and Workers’ Hammer (1984-2011), made available online through the Riazanov Library Digitization Project and the Encyclopedia of Trotskyism Online. The Spartacist League were a breakway group from the Workers Socialist League (led by Alan Thornett) who had broken away from Gerry Healy’s Workers Revolutionary Party in the mid-1970s. The SL joined up with other Spartacist groups in the United States, Australia and New Zealand, forming the International Communist League – a version of the Fourth International that opposed the Mandelite Fourth International which the IMG belonged to. In his 1984 work, John Sullivan described the Spartacist League as ‘very unpopular’ and ‘increasingly unbalanced’ and are probably best known nowadays for their absurd defence of regimes such as North Korea (accompanied by unintelligible placards announcing their position – see here).

Flicking through these SL journals bring the reader the joys of reading some of the most sectarian and rant-filled material ever created by the British left. The first issue of Spartacist Britain, published in April 1978, claimed that the fusing of the London Spartacist Group and the breakaway Trotskyist Faction of the WSL into the Spartacist League was the ‘rebirth of British Trotskyism’, calling the gathering of less than 60 people ‘one of the largest and most important in the 15 year history of the Spartacist tendency’. 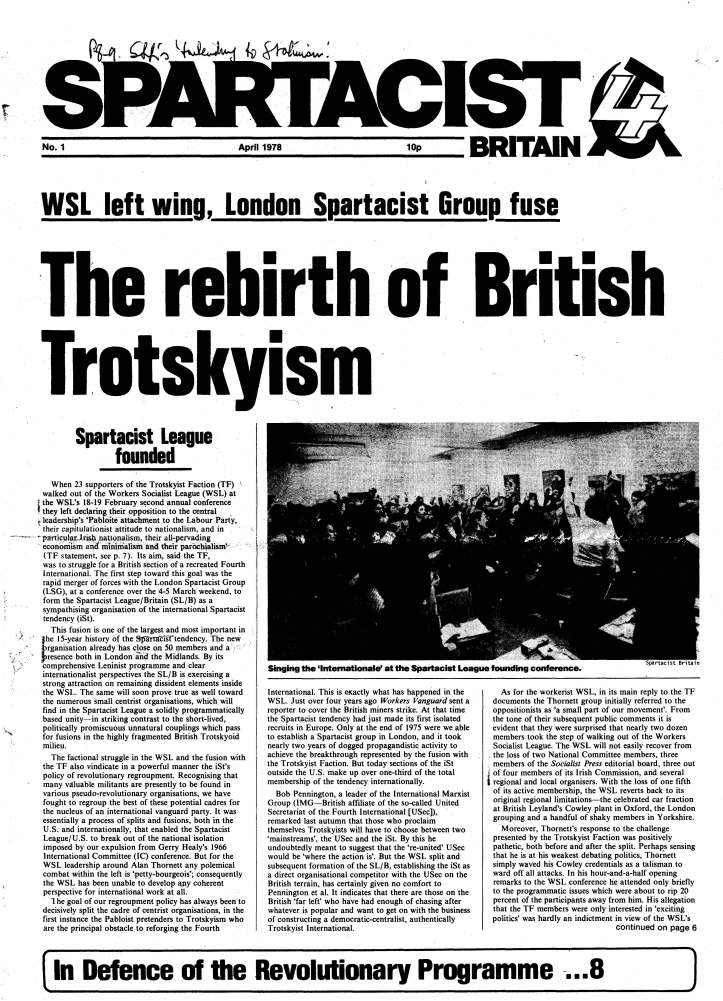 In October 1978 (p. 3), the paper railed against the IMG for being Eurocommunist, declaring:

The IMG, as it tails the rab-bag around the NLR — which itself flutters about with every wind from Paris, Rome and Madrid — will never advance either the theory of programme of Marxism.

Despite its often ragged and dog-eared appearance, however, the IMG is the British section of the largest world organisation claiming to be Trotskyist. Within its ranks are scores of subjectively revolutionary militants, now deeply cynical, clinging to this burlesque of Marxism only because of the United Secretariat’s size and reputation. The road to the rebirth of the Fourth International necessarily passes through the political destruction of the United Secretariat and the winning of its best militants to the authentic Bolshevism of the international Spartacist tendency.

In the aftermath of Thatcher’s 1979 electoral victory, the SL accused ‘Labour traitors’ of helping pave Thatcher’s way to power, singling out the SWP and the IMG for calling for a Labour vote, stating that ‘In contrast the Spartacist League emphatically insisted that the workers had no interest in returning the Labour strikebreakers for another five years of anti-working class attacks’. (June 1979, p. 2) The SL acknowledged that during the 1974 elections its previous incarnations had ‘called for critical support to Labour candidates’, but declared:

But to call for votes to Labour at a time when it had thoroughly demonstrated its treachery and was running on its openly anti-working class record and programme would have been to junk Leninist tactics designed to win militant workers away from social democracy, in favour of unvarying and de facto unconditional support for the reformist betrayers.

In opposition to the pro-Callaghan electoral machines, both official and pseudo-revolutionary, we said in our leaflets and interventions through the election campaign: ‘No vote to the Labour traitors, any more than to the bourgeois parties’.

In the same June 1979 issue (p. 5), the SL wrote its verdict on the counter-demonstration against the National Front in Southall in April 1979 where an anti-fascist protestor, Blair Peach, was killed by the police. The SL complained that the tactics of the Anti-Nazi League and the SWP had ‘been tried and found wanting’:

suicidal attempts to battle the cops to get at the fascists; popular-frontist alliances and calls on the state… to outlaw the fascists; candy floss, toffee apples and the music of Tom Robinson; the wads of paper, cheap tin badges, the throw-away placards churned out in place of the thousands of workers who need to be brought out to confront the fascists in the streets. All these — and nothing substantial or lasting to show for it.

The SL instead called for ‘defence guards’ to combat the NF on the streets:

[T]he way to throttle the Front is through drawing on the mass strength of the working class. Workers defence guards drawn from the car factories, the steel works and the coal mines, experienced in common struggle and backed by thousands of organised workers, are the force that can pulverise the National Front into the ground. Such defence guards will only be established by waging a sharp struggle inside the unions, against the bureaucrats who do nothing but thump the social-democratic pulpit and sermonise on the evils of racialism. They must be ousted from the leadership of the labour movement and a revolutionary party forged to carry forward the struggle for a new social order — workers government and a planned socialist economy. This is the only road for ending for good the anarchy of capitalism which, in its death throes, inevitably spawns and nourishes the fascist scum.

In May 1981, as Thatcher’s popularity waned in the wake of the Brixton riots and the death of Bobby Sands (and Tony Been challenged Dennis Healy for deputy leader), the SL warned against viewing Labour as an alternative to Thatcher. Once again, the SWP and the IMG were singled out for the capitulations to social democracy:

Cliff & Co. long ago sold their soul to the bourgeoisie, but they have carved out a sort of niche as a small, organisationally independent, virulently anti-Soviet ‘militant’ syndicalist competitor to the Labour ‘lefts’. But the IMG is centrist, and by virtue of that incapable of any consistent perspective and orientation. (p. 2)

In the same issue (p. 3), the SL proclaimed their support for the Soviet Union against ‘US imperialists’ and ‘clerical-nationalist reaction’ of Solidarity, stating:

Revolutionaries and all class-conscious workers must oppose this imperialist provocation [the emergence of Solidarity] and unconditionally defend the Soviet bloc states against counterrevolutionary attack.

The support for the Soviet Union remained steadfast as Gorbachev’s reforms were introduced and the the Eastern Bloc started to break-up. In January 1990, the Workers’ Hammer (the now bimonthly paper of the SL) claimed that the position of the ‘British fake left’ on East Germany, after the fall of the Berlin Wall, was a ‘spectrum of betrayal’, documenting how each publication of the various leftist groups had ‘sold out’ the DDR, calling Militant ‘present-day Scheidemann and Noskes’, the SWP supporters of ‘some of the darkest forces of imperialist reaction’ and the Communist Party of Britain (publisher of the Morning Star) ‘prostrate before the historic betrayal of Gorbachev’s announcement that re-unification [of Germany] under capitalism is “inevitable”. (p. 3; p. 11)

These are just some snippets of the sectarianism and ideological contortionism that the Spartacist League has indulged in since the late 1970s. I’m sure if you read these digitised copies, you will find much more hilarity and bizarreness. If anyone finds any more howlers worth mentioning, please post them in the comments below.

PS – if this is public face of the Spartacist League, imagine what craziness you could find in their internal documents! Researchers interested in the sectarianism of the British far left can find the archival records of the SL at the University of Warwick’s Modern Records Centre.