Inside the paranoid Maoist cults of 1970s Britain: A post at The Conversation UK 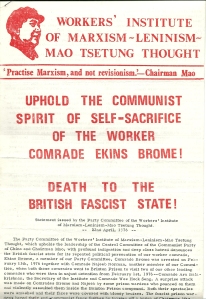 The couple accused in the case of alleged “domestic slavery” in London were reportedly the leaders of a tiny Maoist sect, the Workers’ Institute of Marxism-Leninism-Mao Zedong Thought, which had gone “underground” in the late 1970s. To understand how the Workers’ Institute ended up so far off the radar, we need to understand where they came from – the strange world of radical Maoist politics in 1970s London.

And the rest can be viewed here.

I would like thank Sam Richards from the Encyclopedia of Anti-Revisionism Online for his help with sources and additional information, Matt Fitzpatrick and David Lockwood for reading the draft version  and Andrew from The Conversation for his editorial work.

I thought readers might also be interested in some observations made by Sam, which I wasn’t able to incorporate into the final article:

1) It was the Cultural Revolution that inspired a new wave of Maoist organisations, largely populated by (previously non-aligned) students. They were joined by some anti-revisionists (mainly ex-Communist Party members)  active in the original groups, but those original groups faded away. English Maoism was at its most active a new, radical and immersed in Maoist rhetoric and imagery.

3) Communist Unity Association (Marxist-Leninist) judged they had “adopted ’Maoism’ as a source of slogans, ritual chants and the focus for a student cult” in Imperialism and the Struggle for a Revolutionary Party (1974).

4) While the Workers’ Institute was both small in size and largely separate from the other maoist groups, there was always the embarrassment that they would be thought of as “typical Maoists”. In fact the splintering of the Maoist trend in the late 1970s did see the largest (Birch’s CPBML) and the third largest (CPEML under their new name of RCPBML) side with Albania – that is the “supermaoists” of the sixities denounced Mao as anti-Marxist.

5) An alternative journalist viewpoint from 1978, available on EROL, showed that at the time,  the Institute was equally regarded as strange.

“A short guide to Maoists in Britain”, The Leveller, No.20, November 1978:
“An encounter with the Workers’ Institute of Marxism-Leninism-Mao Tse Tung Thought [“we have undertaken the unprecedented task of building the first stable base area in the imperialist heartlands, in and around Brixton …this has driven the British bourgeoisie up the wall”], truly the most lunatic of the lunatic fringe of left politics in Britain, can be an unsettling experience. Tiny in numbers and fanatical in zeal, carrying dogmatism, rhetoric and sectarianism to ever greater extremes, it is many people’s idea of a typical Maoist group.

Not so. Terry Ilott and John Dawes report that of the numerous Maoist groups, there are some which, though small and theoretically weak (unlike their counterparts elsewhere in the world) we might take more seriously than we do.”

Sam also provided some unseen pictures of the Workers’ Institute, which you can see in this post.

And as I wrote here, the history of British Maoism still needs to be written! 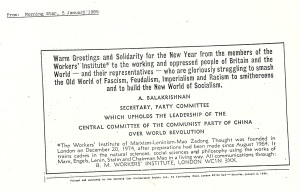