Anti-fascist history: More from the interweb 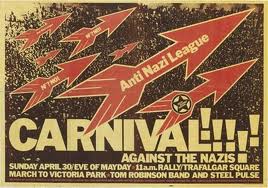 Following on from this post the other day, those interested in anti-fascist history will be pleased to know that David Renton has added three more posts on British anti-fascist history. The first is on the events at Southall in April 1979 when an anti-fascist protestor was killed (I have written about the recently opened sources dealing with this here). The second is on the final years of the Anti-Nazi League after the electoral defeat of the NF at the 1979 elections. The third is on an under-discussed episode in the history of resistance to the NF – the demonstration in Hyde, Manchester where the police banned an NF march, after the events at Lewisham in August 1977, but Martin Webster decided to march by himself and was escorted by over 2,500 police officers.

For those new to this blog, I’ll also mention that you can read my own articles on the Anti-Nazi League and Rock Against Racism (and the relationship between these organisations and the CPGB) here and here.

And finally, if you haven’t visited the Anti-Fascist Archive yet, it is a treasure trove of archival anti-fascist material (especially from the AFA/Red Action years).