When I first started this blog last year, I talked in this post about my collection of flyers for gigs around Adelaide that I had collected over the last decade. As I have a bit more proficient with blogging, I thought I’d post some of my collection in stages here. I hope you enjoy this trip down memory lane!

I played at this gig in Awesome Wells (sic – spelt wrongly by Tom who put the show on). Avalon/SEAS gallery was a great venue, but it was not a licensed venue and thus putting on shows there were difficult to organise.

Another show at Avalon/SEAS. This gig was famous for two things. Firstly, the vocalist for Pretty Girls Make Graves was sick, so people from the audience were recruited to sing with the band. Secondly, the vocalist from Les Savy Fav was mental – I remember him running up the stairs out of the venue as far as the mic lead could let him.

A secret show put on by St. Albans Kids. The gig actually took place in the car park behind The Austral.  St. Albans Kids also put on guerilla shows in Rundle Mall (at the corner of Gawler Place), out front of the Dom Polski Centre and on top of the car park opposite the Elephant & Wheelbarrow. I remember Hardy Coxon being excellent that night.

The first show I played in Awesome Welles. Apes of God (Damn) were particularly awesome.

Before Format and the Adelaide Zine Fair, Dr Ianto Ware was plugging zines at shows like this. I reckon this was shortly after the Jade Monkey opened (which is now shut down).

This is the oldest flyer I have in my collection. Allure used to be a cocktail bar above Supermild on Hindley Street. I think Roo Shooter also played this gig.

Urtext was a weird venue (it was actually a disused office space), but they did put on some great shows. Batrider were originally from New Zealand, but became a default Adelaide band over time.

Halloweens were always spent at “the Church” in Parkside (not the nightclub). A very cool party room and some of the best costumes I’ve ever seen. 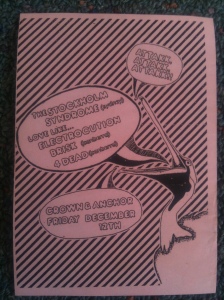 You can’t have a collection of gig flyers without one from a gig at the Cranker. Nuff said, really. 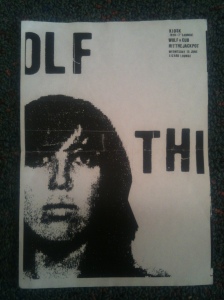 This was a gig with the original Wolf & Cub line-up and I think one of the first gigs put on at the Lizard Lounge when it was in the old Pizza Hut on Hindley St. Kiosk were amazing.

So there you go. I will post more in the future. If you have any recollections of these gigs, or flyers that you’ve tucked away, let me know!